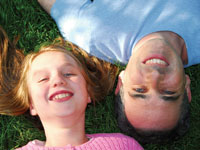 There are more than three times as many single-mom households (12.7 million) as there are single-dad households (4 million), according to the U.S. Census.

Unfortunately, divorced dads raising children as a single-parent household have a difficult row to hoe.

This is because the phenomenon of divorced dads as custodial parents is still in the trailblazing phase.

Traditionally, in child custody arrangements, the mother has received physical custody of the children seemingly by default  – whether or not she was better suited to carry out the job.

There were even instances of a drug-addicted mother being awarded physical custody of the children, on the stipulation that she would complete a drug rehab program first because it was “always in the children’s best interests” to be raised primarily by their mother.

But beneath the slow, liberalization of the traditional family and other patriarchal norms and institutions, there emerges a new breed of dads as custodial parents.

Who is Most Suited to Parent?

But dads with primary child custody have always been considered an inferior custody option to mothers with physical custody. It used to be thought that women had better “instincts” than men because men didn’t “bond” with babies in the womb. But there is no scientific data to back this up.

The traditional legal position is that children, especially those age five and under, do better with Mom as the primary custodial parent. But this long-standing “Tender Years Doctrine” is now coming under fire because it is more of a default position than an empirical truth. Men are just as predisposed to provide nurturing care as women are. It is ludicrous to think otherwise.

While many traditionalists look at dads with child custody as anomalies, more and more dads are proving that men can do more than generate income and coach baseball. In fact, these pioneering men are making way for the dads of the future. Why can’t a dad do what a mom does? He may have not been socialized in the nurturing dad role, but he can certainly figure it out.

Pay close attention to these dads who are bucking the tide. Even though generational attitudes are still floating in the murky water, these men are bravely swimming against the current.

With today’s divorce rates at over 50 percent for first marriages and becoming exponentially higher for subsequent marriages, there will be more and more future dads with primary physical custody of their children.

I tip my hat to these intrepid men who are slogging their way through the antiquated attitudes of the courtroom and society-at-large to prove the obvious – that men can parent every bit as well as women.

Ps: sorry for the typos!

I have to say that getting custody of your children is an uphill battle but it can be done. As a father of two young children I was in that very situation about a year and a half ago. The judge that was over my case was very pro mom regardless of the situations. i thought that I would never get them but thankfully the judge finally seen their mothers true colors after several delays or should I say pitty parties. For all the fathers who are tired of seeing their kids be neglected,no affection and being used as a pawn in crazy mind games against their own fathers. DONT GIVE UP. The truth and evidence will finally show through.

I must say that in the southern part of the United States the JDR courts are awarding physical custody to the father if the child is over the age of 5 and the father can just show he can provide a better life. To me that is great but both parents should be subjected to the same standards. If a parent files for custody after the divorce is final and the determination of physical custody is already ordered/final, the parent who files for physical custody should have just cause. Not that they can “give the child a better life”. I have sufferd a huge personal loss of my daughter. She was 9 when a court in Gloucester, VA took away physical custody from me. She had been with me from day one. When we were married and from the time she was 3 when we divorced. I was not doing so good financially and lost my home to foreclosure. Never did my daughter know that our home was taken. I rented a home to move into so we would not have to deal with a forced eviction. The new rental was smaller. We could not afford the internet for a while. We could not live the same lifestyle we once did. We had all the essentials in life but the JDR court said that things like not being able to afford the gear for my daughter to play field hockey or take horseback lessons was something my ex could afford. Now my little girl is 13. She is not even allowed to call me. As she was told I was trash because I could not afford to fly her to visit for Christmas. That I was not working hard enough to afford to be a parent. All I can see is that the laws need to be more cut and dry. Carefully set the laws and try not to bend them as each JDR court should not have so much power. This is an example showing that the court has always had too much power over children and that the standards have only become worse.

“Giving a child a better life” has nothing to do with money! Your daughter could ride a horse around all day and never have a parent child relationship and there are always creative ways to get field hockey equipment. Such as tag sales, stores that deal in used sports equipment and free on internet sites or talking to the coach about resources.
And don’t fly on holidays get a cheap ticket on the off season to visit, your daughter does not care when you are there, just that you ARE there!

I lost custody of my two boys even though I was assured by my attorney that men are better suited (according to a scientific study, which he never used in court) to parent young boys. I’ve maintained as close as possible contact with them and now only have one who’s still in school. My ex claimed that I’m an abusive father and simply could not prove it, because I am not. She’s also told my guys that I stole large sums of money from her even though she’d never worked or earned any such money. Now she works, goes to school, and is engaged. Even though I’m a disabled veteran and stay at home man (which I was for nearly 3 years before we divorced) I could not get custody. Furthermore, the court used my social security and disability income to determine support even though that is strictly forbidden according to state law. Finally, the judge simply had social security money I received for my children granted to her even though it was more than 2 hundred dollars more that the calculated ammount even with the inaccuracies) So, I’ve paid her more than 2 hundred dollars more every month simply because the judge thought it was ‘the right thing to do’. How does a man keep from being bitter after this kind of obvious non-blindness from lady justice? The system is definitely bias in Indiana. I’ll continue to work at getting custody and even though I try hard not to bad mouth my ex and insist that they show her respect, I’ve still got a very bad taste in my mouth regarding this issue. I paid the bills, did the laundry, fixed the meals, ironed her uniforms, homeschooled the kids and completely remodeled the house while we were together and she was attending school. I fail to understand how she is the better parent for the boys!

It’s just crazy that the courts still believe that because a woman gives birth to a child she is the better suited parent. It is time to break tradition and award primary custody based the facts of the case not unproven or outdated doctrine!

I agree 100% More and more dads have physical custody of their children, as I do, and are stepping in and stepping up to be great parents. I would be preaching to the choir here, but there is nothing a devoted dad can’t do as well as the mom, and sometimes more.