Home / Articles / A Father’s Love: An Interview With David Goldman 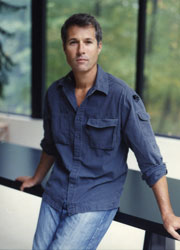 Shortly after waving goodbye to his wife and son at a New Jersey airport in 2004, David Goldman was thrust into the worldwide media spotlight as he waged a 5-year long, and ultimately successful, international custody battle to be reunited with his son, Sean.

Goldman’s then-wife was taking their son to Brazil for a brief vacation, but she refused to return from Brazil starting a complex custody and abduction battle that took five years until David was reunited with Sean. The case drew the attention of the international media, as well as Secretary of State Hillary Clinton.

Goldman has written about the experience in his book called “A Father’s Love,” which is available at bookstores and online retailers nationwide.

In a discussion with DadsDivorce.com editor Matt Allen, Goldman shared the emotional toll of the abduction, how he’s had to overcome parental alienation, and why dads everywhere should read “A Father’s Love.”

You can learn much more about David and Sean’s story by visiting the website BringSeanHome.org.