Home / Articles / How Can We Stop Parental Alienation? 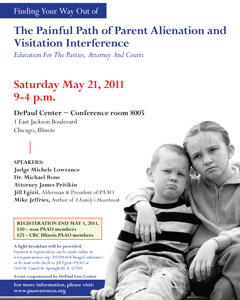 As I mentioned in my previous column about Parental Alienation Awareness Month, Parental Alienation Syndrome is currently under consideration to be included as either a “mental disorder” or a “relational problem” in the fifth edition of Diagnostic and Statistical Manual of Mental Disorders, also known as DSM-5.

The inclusion would go a long way toward creating awareness and helping children and families affected by this disorder. (Read “10 Facts About Parental Alienation.”)

DSM-5 is published by the American Psychiatric Association (APA) and provides a common language and standard criteria for the classification of mental disorders. The DSM-5 is scheduled for release in 2013.

I would make three recommendations once PAS is included in the DSM-5:

1. Change the trigger for a PAS evaluation from when the child refuses to see the parent to at the beginning of a custody evaluation where the evaluator looks for early warning signs of alienating behaviors. When it gets to rejection, the prognosis is not good.

Draconian measures tend to be more successful at this juncture where there is a custody reversal or the child has limited contact with the alienating parent. However, if you can address these issues early enough there is a greater chance of the child enjoying a full relationship with both parents.

2. PAS is made more possible when the child lives almost exclusively with one parent.  Parenting time policies that provide schedules that foster meaningful contact between the child and the non-resident parent is an effective strategy in preventing PAS.

This means that schedules must go beyond typical alternating weekends and include school overnights. The potentially targeted parent becomes meaningfully involved in the child’s daily life. This will help underscore the dichotomy between what is said by the alienating parent and actual behavior.

Children’s Rights Council of Illinois has been a major advocate of such policies and has introduced several initiatives.

3. Limiting contact is a common strategy used by the alienating parent. State policy needs to send a clear message that the psychological well being of the child is as important as the child’s physical well being. Visitation interference will not be tolerated.

States need to ensure that visitation, custody and child support orders be enforced in the same manner providing the same sanctions and remedies for non-compliance. I strongly encourage the support of Illinois HB1604 (“The Steve Watkins Bill”).

This bill mirrors the same penalties for visitation interference that occur in non-compliance of child support. Those living in Illinois please join Illinois Fathers and call your Senator voicing support for this long overdue bill.

I would also like to recommend that you register for a very special workshop co-sponsored by DePaul Law Center and Parental Alienation Awareness Organization (PAAO). It is called “Finding Your Way Out of the Painful Path of Parent Alienation and Visitation Interference:  Education for the Parties, Attorney and Courts.”

It is being held on Saturday, May 21, in Chicago. 3 comments on “How Can We Stop Parental Alienation?”

It should also be noted that the mother is not always the alienator, especially when the father has lied to the courts in order to gain nearly full time custody.

Parental Alienation
I agree that awareness is the key. I think folks need to tell their story.

Here is my personal experience with Parental Alienation. Warning, strong language. I’d be interested in any feedback. I hope this video helps other people in similar situations. Thanks.

Thanks
Thank you for highlighting parental alienation and plugging our PAAO conference at the DePaul Law Center on May 21st. Awareness and education are the keys to helping other families avoid these heartbreaking situations, and articles like yours and the PAAO Conference helps parents, legal and mental health professionals learn how to address alienation both legally and therapeutically.