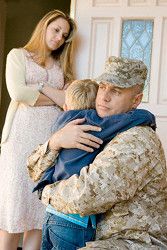 A previous divorce article looked at the widespread issue of divorced dads in the military losing child custody while on deployment.

Most military dads are unaware that they could lose custody during their deployments, even with the Servicemembers Civil Relief Act (SCRA), which was designed to provide protection to active members of the armed forces from civil actions back home.

However, the SCRA was ambiguous in its language about handling child custody matters, resulting in many military fathers continuing to lose custody of their children while deployed.

An amendment to the SCRA was passed in order to tighten the language about child custody and make it more specific to the problem at hand, challenging the “best interests” language.

This amendment gives all 50 states federal protection on default judgments and staying proceedings when the serviceman has had notice. Additionally, it includes language specific to child custody proceedings.

Another similar amendment designed to protect fathers rights while deployed has been introduced and is presently languishing in the Congressional Committee logjam of pending legislation. It is unclear if this proposed amendment has any chances of garnering approval in all three branches of government.

Progress at the Pentagon:

The Pentagon and the Senate have historically looked at the issue of soldiers losing child custody due to their deployments as a state issue that would be further complicated if it was legislated at the federal level.

However, Defense Secretary Robert Gates said the Pentagon would begin working with Congress to help craft a bill to ensure service members are not unduly penalized in child custody disputes because of their military service. This was a complete reversal of the Pentagon’s original stance, no doubt brought about by public pressure.

The Least We Should Do:

Our soldiers should not have to bear the ongoing worry of permanently losing custody of their children while on deployment defending our country’s interests. Their deployments should not be factored into court decisions on changes in permanent custody.

The very least that we should do in all cases is put the permanent child custody issue on hold until service members are back in the United States and can participate in the legal process – in person.

Part 1 of this article looked at the SCRA and provided examples of military dads losing child custody during deployment.

Oh really, because my ex left me for the soldier he got pregnant in Iraq and I let him make the decisions, he only wanted every other weekend until they were old enough to turn against me and he got sole custody 8 years later, and they call his walking mattress mom now. Articles like this are propaganda and far from reality. Don’t believe statistics and never believe that fathers are not winning in family court. When they go to trial they win. Most don’t try.

I am looking for a very good attorney near Fort Walton Beach FL for my active duty son stationed in Korea. He would like someone who specializes in child custody of military member. Thank you,