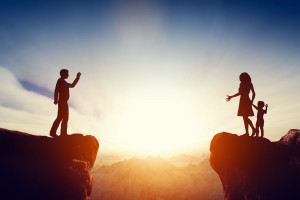 Recent comments issued by Arizona Gov. Doug Ducey in his annual State of the State Address show that the myth of the deadbeat dad is alive and well.

Ducey, a father of three, launched a campaign to crack down on so-called “deadbeat dads” by posting names and photos to Twitter and Facebook of the “worst of the worst” in hopes that the public shaming will coerce them to pay their unpaid child support.

“For too long you’ve been able to remain anonymous – able to skirt your financial and legal responsibilities with no shame,” Ducey said. “Not anymore. Effective immediately, the state is going to begin posting the photos, names and money owed by these losers to social media with the hashtag #deadbeat.

The campaign targets the 421 “deadbeats” in the state (34 of whom are women).

The parents on the list owe more than $5,000, have a warrant issued for their arrest, have missed child support payments for at least 6 months and their location is unknown.

Ducey claims this campaign is to help the high number of vulnerable children in Arizona, but others aren’t so sure of his motives.

Arizona Fathers’ Rights, a volunteer group that assists fathers and families through the process of family courts, called the move a “cheap publicity stunt.”

“The fact is well-known that the vast majority of people labeled as ‘Deadbeats’ are simply dead-broke,” David Hamu, the group’s chairman of the board, said to NBC News in a statement. “Moreover, this sort of gender bias would result in a typhoon of outrage if women were being singled out and it is truly awful that Gov. Ducey doesn’t acknowledge that there are mothers who are obligors who should also be targeted during any crackdown.”

Any campaign against “deadbeat” fathers is almost certainly misguided if you examine the data and research regarding parents in the child support system.

Obviously, parents who willingly skip out on child support should face severe consequences. There are a number of enforcement tools already in place for that purpose – from wage garnishment to driver’s license suspensions.

However, more often than not, dads fail to pay their support not because they are unwilling to do so, but simply because they don’t have the money.

Consider some of these statistics:

What’s more is that even the most financially disadvantaged fathers seem to find other ways to contribute to their children’s upbringing. A study of nearly 400 low-income noncustodial fathers found that many of those dads still found ways to provide in-kind support (non-cash goods). “The most disadvantaged dads end up looking like they’re completely distanced from their kids but they’re actually giving quite a lot,” Kathryn Edin, an expert on low-income fathers who helped conduct the study, said in a statement. “I was really surprised by how much these disadvantaged guys, these truly marginally employed men, are putting all of this thought and what little resources they have into showing their children that they care.”

Stigmatizing parents who fail to pay child support as “deadbeats” ignores how complicated life is for many people.

The characterization also fails to acknowledge how flawed the modern child support system is. There are plenty of dads who find themselves in an unending cycle of debt despite their best efforts to support their children.

Child support payments don’t necessarily stop during periods of unemployment. Too many missed payments can lead to incarceration. While in prison, the debt continues to accumulate since incarceration is considered “voluntary unemployment.”

Once released, these individuals face low employment prospects. Up to 60% of former inmates remain unemployed a year after their release.

With a mountain of child support arrears that continue accumulating and no job prospects, many feel forced into illegal activities to make ends meet. That of course puts them at risk for reincarceration.

And the cycle continues.

This is the reality many dads tragically face.

Recent legislation proposed would work to establish a child support system that is more rehabilitative than punitive, but it is uncertain if those proposals can make their way through Congress. Regardless, it would still likely take years to overhaul a system that is so broken.

Coming up with realistic solutions that are fair to fathers and mothers and provide the financial support children need during their formative years is a complicated and daunting task.

For some politicians, it probably seems much more convenient to just label them all deadbeats and move on.

And what, pray tell, happens if the “deadbeat” dad isn’t a deadbeat but that the government or agency made an accounting error? Does the dad get to sue for defamation or slander? Again, another law that puts undue burden on fathers without thinking through ALL the consequences.

The audacity of this piece of garbage makes my skin crawl. 1) For the idiots that say just pay let me explain something to you. 1) Whenever a non-custodial parent misses a payment. The Federal Government immediately covers it. BUT THEY KEEP THAT PAYMENT. Then when the parent can finally make up the payment they use to put most of it towards the interest they charge on a payment that’s already been made by the Feds. Thus stealing more money. 2) The court doesn’t care if you lose your job, an arm, get cancer, go deaf, go blind, or your in a coma. They still will charge you the illegal interest and don’t care if you have to take 5 buses to get chemotherspy. Cancer or anything else is never a good enough reason to lower your arrears. 3) All of the Judges in every state are criminals. When the state turns in the interest to the FEDS. The Feds give them 67.7% of the money back. It’s actually 100% because remember they’be already stolen the child’s check every month a parent is late. 4) Here’s the best part, if the state collects more interest than the year before the FEDS GIVE THEM A BIG BONUS. AND WHEN ALL OF THAT MONEY IS RETURNED TO THE STATE THEY PAY THE MOM’S RIGHT? NOOOO.

First they pay 5he state payroll. AND GUESS WHO GETS PAID FIRST? That’s right family court Judges and they get salary increases and bonuses and other cash that they all typically launder thru non-profits…I found one of these scumbags on 7 non-profit boards. So yes this is fraud…But everyone benefits. And THE STATE BAR SET IT UP THIS WAY. They are the worst scum on earth. Every lawyer will tell you there is nothing you can do but pay. They won’t argue the unconstitutionality the illegality how your rights have trampked. Every man who walks into court for support hearing is facing an entire room of state employees that are all benefitting financially by you not being able to keep up and getting you into interest payments…there is no morality left these judges are all felons and you need to look up and understand your rights….child support is illegal and fraudulent. The goal is to take the strong figure out Dad. If you control the kids you control the future….go to you tube it’s the only honest resource to help you….let’s get the real criminals in jail….God Bless

I bought a house partygoer years ago an all of the work I’ve done an my lawyer says there’s no equity !! She wants the house an just take my name off of the mortgage But I had it set up to come out by Weske but she didn’t pay the extra 100.00 a month SO know what started out as a 39 year note is a 17 yearn note SHOULD I GET ANY OF THE INTREST OR DID I JUST GIUVE HER A HOUSE THAT SHE CAN PAY OFF IB -7 yrars PLEAZE CONGA T ME vindownum@yahoo. com 918 348 9129 Please contact me
Von Downum
Muskogee OKLA

I am the Mother of a Son who pays support on his two Sons and I have a Daughter who receives support on her Daughter. I see the problems from both sides. My son pays his support every month and he has his sons every other weekend. He has no back child support to pay but this past summer DHS started sending him small checks for overpayment. Tax times comes and they send him a letter saying he owes over $500 for child support. How can he owe when they have been sending him checks? My Daughter who is suppose to receive her child support on the 1st of the month never gets it until the middle of the month or later. When she calls DHS they tell her that they cant tell her anything. Last month she only got a very small amount of her child support and they sent her a letter telling her that the other amount, of child support, that she would not get was kept to pay for interest on the back child support that her ex owes. Why are they taking interest payment out of her child support and not the ex pay it? Why does DHS keep the interest payments anyway, its not theirs. DHS should be removed from having anything to do with Child Support payments. Common sense laws should be made and the laws on the books now should be voided. I could say much more but I get so frustrated at the system I have to stop. Laws need to be changed and it should be on a case by case agreement, you can’t just lump all cases together.

I think it’s ironic how in the article it stated that most Dads don’t pay simply because they are broke…and what about the Mom’s ? SOMEBODY has to raise the children that these two people created. What if the mom just threw her hands in the air and
“decided” she’s BROKE ? I don’t buy “I’m broke” work at McDonald’s, walmart, Taco Bell, etc… I am a nail technician and I clean houses on my days “off”. I can’t just lay down and claim “I’m broke” why?????? Because I gave birth to these three children and they are counting on me to eat and survive. So screw the little pity “I’m broke” act. JUST MAN UP ALREADY!!!!!!

Who delivers child support papers to there house?